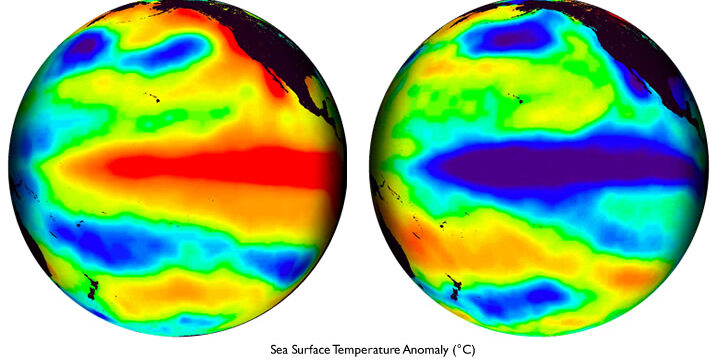 In the word of weather long range forecasts you El Nińo and La Nińa. All the media reports and common watercooler discussion mentions these terms; they are mainstream. But you might want to know what they really mean and how they influence weather where you live.

Like many popular weather terms the media can twist the actual science and hype things up. We want to set the record straight. Both are complex weather patterns resulting from fluctuations in ocean water temperatures. Those ocean temperatures influence high and low pressure areas and the actual temperatures we see in the atmospheres. Generally speaking, these periods last for 9 – 12 months and recur every 2 to 7 years. In 2022 we are in a La Nina for the 3rd year in a row. That is very rare, but it does not mean it will inherently cause very rare weather conditions.

So, what’s the difference? Imagine them as brother and sister. El Nińo means ‘The Little Boy’ in Spanish, so think of El Nińo as big brother. La Nińa means ‘The Little Girl’ in Spanish, so consider La Nińa as the little sister. Like siblings they contrast and can be very different. El Nińo is compared to a boy because, well, little boys can be ornery. Little girls aren’t usually as much of a basket of fun; well, until they become teenagers! 😉

They are part of the El Nino Southern Oscillation (ENSO), which is a cycle in the equatorial Pacific Ocean. La Nina representing below average temperatures for the water surface temperatures in this area. El Nino is warmer than average. Remember, that’s thousands of miles away in the ocean not necessarily in the United States or Canada or anywhere else.

El Nińo Is Known As The Warm Phase

Big brother, El Nińo, is known as the “warm phase” of the oscillating pattern and typically brings along more extreme weather. Warming Pacific Ocean surface waters cause the tension in the atmosphere that results in warmer than average temperatures over much of North America during winter months. Southern states can expect to be a bit cooler and wetter than normal. The warmer Eastern Pacific waters change global weather dynamics and fosters the odd weather. The effects are strongest during northern hemisphere winters because ocean temperatures globally are at their warmest.

La Nińa Is Known As The Cool Phase

Little sister, La Nińa, is known as the “cool phase” and ushers in cooler than normal temperatures. La Nińa will still result in winter storms, but usually not as severe as big brother. During a La Nińa winter, temperatures tend to be warmer in the Southeast and cooler in the Northwest. Southern states will tend to see less precipitation.

Not The End-All Be-All

Just because we are in a La Nina or El Nino does not mean it will end up like the typical winter diagrams. Climate is all about averages and relative conditions. Over the course of 50-100 years of weather history there are identified trends that occur more than 50% of the time. That still means it dos not average out that way some years.

While ENSO is a big factor in how a winter season averages out in your neck of the woods it is very far from the only factor. There are many other teleconnections and oscillations at play in different parts of the world. They all weigh into the equation on how your local weather is affected. Want to learn more about different ones? Here are a few important ones

Is there always a La Nina or El Nino? Nope, sometimes there is la nada… Okay that is not an official term. But we can see neutral ENSO conditions when temperatures are within 0.5 degrees from average.

Thanks for reading? If you are a snow contractor then the best place for news and reviews about products and services is on Snow Plow News!