You are here:
WinterWinter Predictions 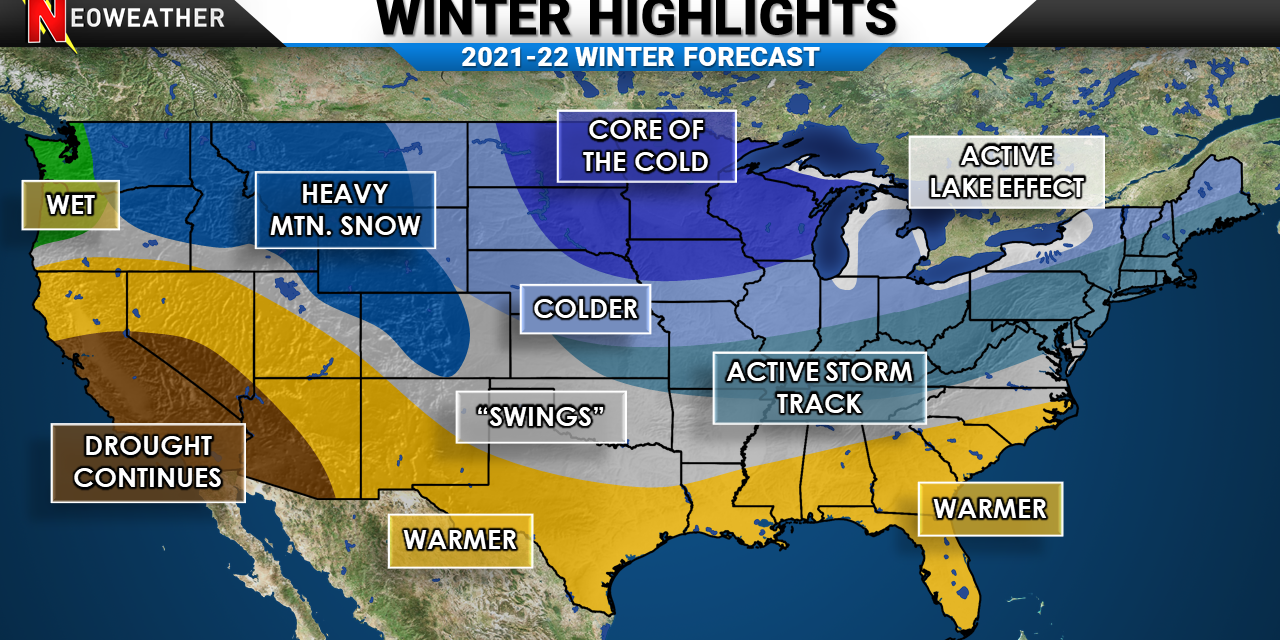 While some of you can’t wait for the snow to be falling others miss summer weather. It’s normally pretty divided this time of year just like the debate about the right time to put up Christmas decorations. We’ll save that discussion for another time! Whether you like cold and snow or not you likely still care what’s expected this winter. Your winter forecast will provide some clues.

The official Neoweather 2021-2022 Winter Forecast is here and ready for your viewing and reading pleasures. Before we get into the outlook let’s take a little look back at last winter.

December temperatures compared to average is on the left. January in the middle and February on the right. While there were active periods with cold and some big snows in the first half of winter there was also mild and quiet stretches. February is where things got memorable for ice and major cold. We can’t recap last winter without talking about the damage that Texas saw from the major freeze. Our forecast for last winter was hit and miss. There certainly was a lot of Canadian warmth. After the quick start to winter in the eastern US it sure went on hiatus at times in January. It was really an up and down season. This upcoming winter might not be terribly different.

Things To Watch This Winter

There are certainly some factors we look for that will play a big role in the upcoming few months. We expect more cold air relative to average in the northern Plains and Midwest, but besides that there are some similarities to last year. We likely will see temperature swings. When we talk about cold or warm temperatures it’s all about compared to average. All the extremes and “normals” get thrown into a pot. We look at averages in 30 year periods. We just had an update to this period from 1990-2020. This means the average temperatures have warmed since the 80s. It’s common to get comments from people that say “every winter is warm in the south and cold in the Dakotas”. — But it’s all relative.

We expect an uptick in Arctic sea ice eventually, which is the main cold source of air that can spread into Asia, Europe, or the US. For now it is running below average. Think of extra sea ice as more ice in the freezer. If you open the door more cold will come out. Well what is the door in the atmosphere?

It should be pretty active at times in the inter-mountain West and into the northern Plains also. Much of the North will get their fair share of rain and snow systems. Just because above average precipitation and below average temperatures are likely does not guarantee a very snowy season, but it certainly helps the odds. We can certainly get warmups with low pressure systems where rain falls and then it gets cold on the backside of the storm.

How Much Snow This Winter?

Because of what is mentioned above there is always uncertainty on the storm track and enough cold air being in place. Here is generally what we are thinking for snowfall compared to average below. The Rocky Mountains will be snowy. Idaho and parts of Washington and Oregon should be well above average. The Great Lakes snow belt regions have a shot at above average snow because the lakes are warm and that adds instability and could make for heavier snow bands. Just due to the very active storm track and some sustained cold above average snow is possible for Buffalo, State College and Burlington.

Do You Need Expert Weather Forecasts?

If your operation is hurting from relying on free weather sources and is causing you to waste thousands of dollars, then read on. Our snow and ice management forecast service helps contractors, school districts and public works make better decisions around weather impacts. There are many reasons why Snow Plow News says we make storm prep easy. Your company deserves better than inconsistent free apps, amateur weather sites and TV news. You deserve to have The Leading Front In Weather on your side this winter!